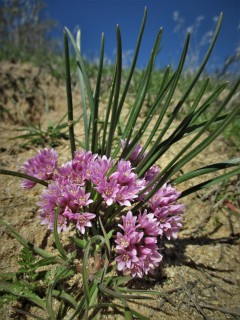 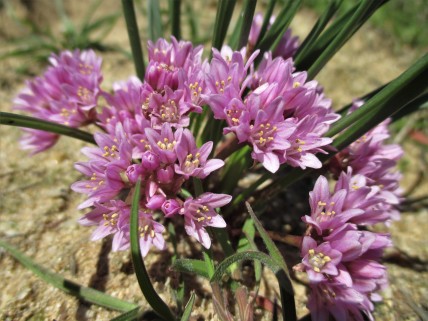 The Aase’s onion is a rare lily species that grows only in Southwestern Idaho. Their radially-symmetrical flowers have six tepals and hug the ground. Their long, thin leaves are chive-like. They bloom in MR and LHG. 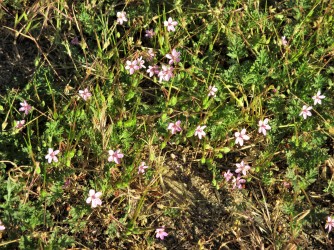 Crane’s bill is a flowering plant that has tiny pink flowers with five petals. It grows in large mats hugging the ground. The plants are one to six inches tall. The seedpods are long and thin and look like a crane’s beak. Its leaves are feathery and fern-like. It can be seen in all three areas.

The Hooker’s onion has a puffball-like cluster of small, radially-symmetrical flowers attached to a single stalk. As with all lilies, each tiny blossom has six tepals. The plants can be upwards of 14 inches. They smell strongly of onions; their bulbs were eaten by Native Americans. This is one of our most common wild lilies. They can be found in all three areas.

Longleaf phlox has bright pink, radially-symmetrical flowers with five petals and thin, hairy leaves. Each petal has a slight indentation at the end. The stems sometimes have a reddish cast. The plants are between two and six inches. They can be found in LHG and MR.

The pale evening primrose has light pink, radially-symmetrical flowers with four petals. The flowers bloom in the evening as they are pollinated by moths. The leaves are toothed and resemble dandelion leaves. The buds are striped. They grow in sandy soils. They can be upwards of 16 inches. They can be found in CBP and MR.

Pursh’s milkvetch grows in low mats early in the spring. The pinkish-purple flowers are pea-like and bilaterally-symmetrical. The plant’s tiny, gray-green leaves are hairy. They are usually less than six inches tall. They can be seen in all three areas.

Showy milkweed has rounded clusters of star-like, five-petaled flowers. The large leaves are grayish and velvety-looking. Its sap is milky, and like other milkweeds, is fed on by monarch butterflies. The plants are between one to four feet. They can be seen in LHG.

Slender phlox grows in the foothills, often covering large areas. The plants are short, not more than two inches high. Each flower has five notched petals. The flowers sometimes grow in pairs. They can be found in LHG and MR.

Spreading dogbane has elongated clusters of pink, bell-like flowers. The flowers have five curled-back petals. The flowers are striped with deep pink. The plants have oval, green leaves and reddish stems. They grow upwards of two feet. They are found in LHG and MR.

The Wood’s rose grows in large bushes of five-petaled rosettes. The leaves are shiny and serrated on the edges. The thorns are straight. The flowers are fragrant and have the quintessential smell of roses. The bushes can be upwards of nine feet tall. They can be found in all three areas.

Go Back to Spring Wildflowers April-May