I love homemade pumpkin pie with 100% of my heart, and one of my favorite ways to make a pumpkin pie is to stuff a pumpkin with fruit and spiced, sweetened milk and then bake it whole for several hours. It’s delicious.

Plus, it is actually closest to what colonists and pilgrims ate (as they did not always have ingredients like flour to make crust). This article discusses some of the ways pumpkin pies were made in the 1600s:

What were these “former Pumpkin Pies” like? At the time, pumpkin pie existed in many forms, only a few of which would be familiar to us today. [A]n early New England recipe involved filling a hollowed-out pumpkin with spiced, sweetened milk and cooking it directly in a fire (an English version of the same preparation had the pumpkin stuffed with sliced apples).

I started making this version of pumpkin pie a few Thanksgivings ago, when some good friends of mine and I first made this recipe together. It was different, but tasty, and I’ve made it probably half a dozen times since then.

This post contains everything you need to know to make it too.

You need to have a pie pumpkin for this recipe, which is different than a jack-o’-lantern pumpkin. You can sometimes find pie pumpkins at grocery stores around Thanksgiving, and almost all the time at farmers markets from around September-November. You want to shoot for one that is between 4-5 pounds.

I got the above 4.5 pound blue-gray heirloom pumpkin from Peaceful Belly Farm.

To prepare your pumpkin, you’ll need to cut a hole in the top, and remove all the seeds.

First, set down your pumpkin on a clean countertop. I like to lay down some parchment paper first because that makes for easy cleanup later.

Next, take a knife and score a dotted line around the top of the pumpkin no more than 2 inches away from the center stem. After you’ve made your dotted line, cut lightly over it to make a circle.

That will keep you from cutting a lid that is too wide.

After that, use a knife to cut down into the circle. You want to angle the knife in towards the center while cutting.

Make sure you don’t cut down too far and pierce the bottom, or the filling will leak out while it is baking.

Once you’ve got your lid open, it’s time to seed.

You can use pumpkin scrapers for this job, but I find that a large spoon with a thin, sharp edge works best. Just hold the spoon vertically by the the handle close to the spoon bowl and scrape down. Don’t forget to scrape down the bottom and the underside of the top.

You want to get every possible part of the fibrous material the seeds are housed in, so don’t skimp on this part.

I’ve done a filling of apples and raisins (or currants) in the past, which is a combination that was pretty common in late 1600s recipes, but this time I am doing pears and raisins, because there were pears on sale at my local co-op this week. I’m using about 7 pears, and about a cup of raisins.

From the fairies, motherfuckers.

To prepare them, peel and core each pear and then cut it in quarters and set it aside. Then, measure out a cup of raisins and set them aside as well.

For the sweetened milk and spices mixture, add together in a mixing bowl the white and brown sugars, the spices, and the sea salt, and then stir to combine. Measure out 2 tablespoons of this mixture and set it aside.

Open the can of coconut milk and add it, along with 1 tablespoon of vanilla extract, to the remaining sugar mixture, and stir again.

First, preheat your oven to 330 degrees.

Now take the two tablespoons of reserved sugar and spice mixture and rub them onto all the inside surfaces of the pumpkin.

Next, take 1/4 of the raisins and place them in the bottom of the pumpkin. Then pour 1/4 of the coconut milk and sugar mixture over the raisins. Then place pear or apple quarters in a single even layer on top till they have covered the bottom.

Repeat this process 2 additional times, adding 1/4 of the raisins, 1/4 of the coconut milk and sugar mixture, and a layer of pears or apples.

When you have three layers, add the remaining 1/4 of the raisins and 1/4 of the coconut milk and sugar mixture to the top. 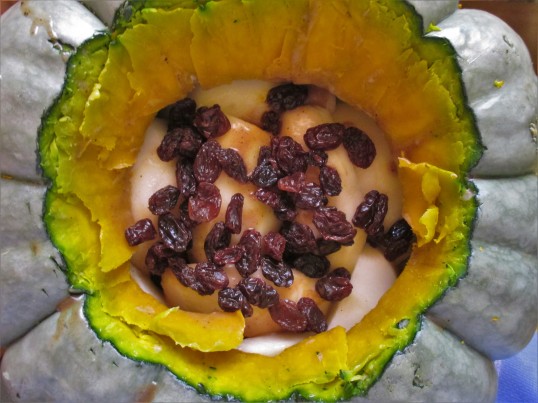 The pumpkin should be filled entirely, with only a little reserve space to set the pumpkin lid back in place.

First, take a large cookie sheet and line it with parchment paper.

Then, take two large pieces of foil (about 2 feet long each) and lay them on top of the cookie sheet to make a cross shape. Place the filled and lidded pumpkin in the center.

Now wrap the sides of the pumpkin with foil, crimping the edges to create a bowl. This will  help protect against filling leaks while it is baking.

A foil diaper for my pumpkin baby!

Bake in the oven at 330 degrees for about 2 1/2 hours or until cooked all the way through.

You’ll want to let it cool for an hour before serving.

Once your pumpkin has cooled, remove the lid.

A pumpkin this size will serve about 10 comfortably.

Or it will serve just yourself for several days if you are selfish and do not like to share your pumpkin edibles. (Second option is superior option.)